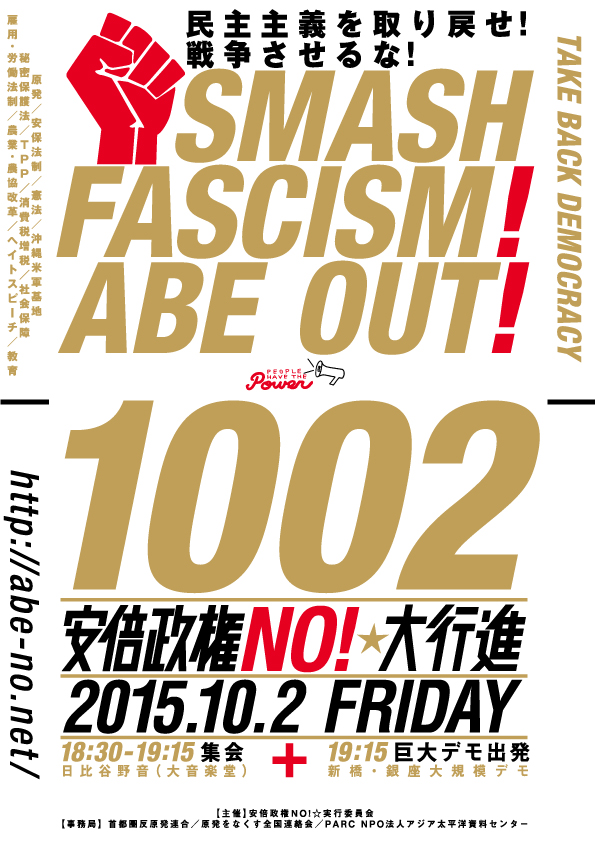 Plans are subject to change. Please confirm details on our website.

As of September 5, 2015, the Second Abe Administration was still frantically trying to steamroll security-related bills, otherwise known as war bills, through parliament despite the fact that many experts have deemed them unconstitutional. The Japanese public has been vocal in expressing opposition to these measures, with a protest surrounding the houses of parliament amassing more than 120,000 people on August 30 as well as tens of thousands of people participating in demonstrations at around 1,000 other locations nationwide on the same day. All over the country large numbers of people are voicing their disapproval of the Abe Administration.

The issues with the Abe Administration extend beyond the security-related bills. In August 2015, the government went against national consensus to break away from nuclear power by restarting the No. 1 reactor of the Sendai Nuclear Power Plant. Concerns are also mounting on other issues such as constitutional amendments, the US army base in Okinawa, the State Secrecy Law, TPP consumption tax hikes, the social security system, employment and labor deregulation, agriculture, hate speech and education.

All of the policies being put forth by the Abe government run contrary to the opinions of the general population. Self-indulgent cabinet decision-making and the railroading of bills through parliament by force of numbers represents a fascist style of government that is a far cry from the principles of democracy. The malicious disregard for the constitution has been sharply criticized by people from all different walks of life.

Most of the media have reported that Prime Minister Abe is set to be re-elected in the LDP presidential election on September 20. Keeping Abe in office suits the agenda of the LDP but is clearly not the desire of the overwhelming number of us the people. It is our duty to see the end of the Abe Administration, the worst postwar government Japan has witnessed. We urgently call on support from people at home and abroad to raise your voices against the Abe Administration.

We are currently looking for other groups and organizations that are in agreement with what we stand for. We will release the names on our website of each group/organization that registers with us. Register here:  http://abe-no.net/賛同のお願い

Help us with flier distribution

We will send you the fliers free of charge. Help us to spread the word to as many people as possible.

Help us with a donation for the event

The “ABE UNDER SIEGE! October 2 Protest” is run solely on donations from ordinary citizens. Please help us to continue our work with a donation.

Use the power of the internet!

Send a message to PM Abe and voice your disapproval